MY KIND OF CHRISTMAS MUSIC: Father Christmas by The Kinks 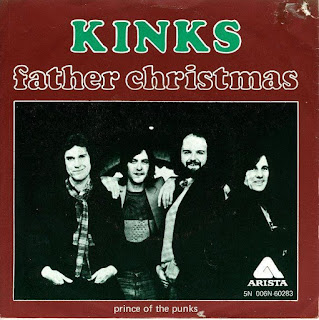 If you ask me ‘Beatles or The Stones?,’ I’ll invariably respond ‘The Kinks.’

Ray Davies and his band were in the trenches during the British Invasion, but they were...odd.  I don’t think anyone simultaneously hated and loved the national image of his nation as much as Ray; when he wasn’t sneering at the typical British Gentleman in ‘Well-Respected Man,’ he was decrying the disappearance of Iconic Britain in ‘The Village Green Preservation Society.’  He seemed torn between wanting some utopian ideal of his country and advocating for tearing it down....

Which is why ‘Father Christmas’ is such a great Kinks song.  In it, Ray recounts his fondness for Christmas in the old days, and contrasts that with a more recent memory, where he was mugged while playing Santa Claus outside a department store.  The muggers are what I think my good friends Andrew Leyland and Jim Moon would charitably call 'chavs,' and are certainly the chatty sort about their lot in life and what they really need to prosper.  So we get both sides of Ray's conflicted view of his native land--a harsh political polemic and wishes that we be mindful while drinking our wine.

The song is also near timeless...if it wasn't for that damn reference to 'a Steve Austin outfit.'  That is kind of jarring.  But because of the narrative, it's fairly evergreen....Hell, we're at a point where the economic divide between rich and poor is just as great as it was in the 70's when this song was written.  And there's something timeless about the rather insistent (and catchy) drum fills contrasted with those jingle bells.  This is not sugary sentiment; Ray is painting us a picture of how the real world is as we're lost in holiday fantasy land and is trying to pull us back just a little bit.

So enjoy some social commentary from the band that should've been namechecked in the same breath as The Big Two.

The Domicile Needs A Christmas Miracle!  Recent events have demanded that the Domicile's laptop be upgraded...and we need your help.  Please consider becoming a Domicile of Dread Patreon, which will net you exclusive essays, podcasts, movie commentaries and even the chance to assign me articles that'll be published on this very blog depending on the level you sign up for!  If you can't commit to a monthly contribution, consider a one-time tip by buying me a Ko-Fi.  Every little bit helps!

On this, the episode before the absolute hellacious hilarity that is Episode 666 (and we’re not joking, folks; you’re going to be awhile),...